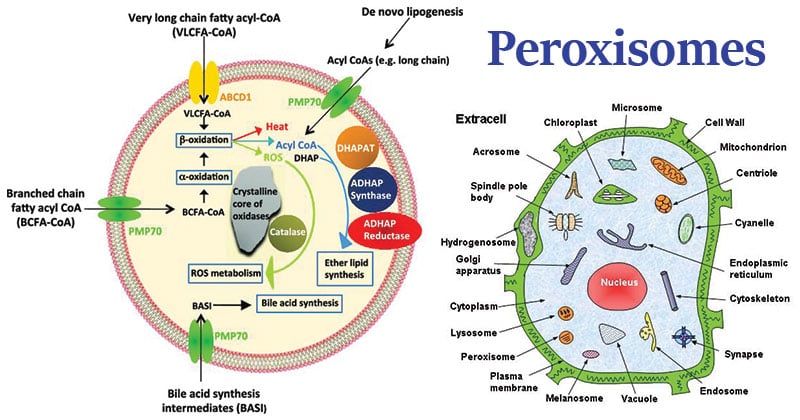 It has many oxidase enzymes as well. So, oxidation catalysts enzymes are the key enzymes present in the ribose in the inner peroxisomes. The enzyme oxidase would oxidize any long-chain fatty acid or D amino acid etc. The H2O2 production is not suitable for the cell. However, H2O2 is also in the reactive oxygen species. Somehow, the enzyme catalase converts H202 into a less harmful state. So catalase catalyzes the breakdown of Hydrogen Peroxide to water and oxygen. Water and oxygen none of them are detrimental to the cell. This is how our body recycles and breaks down the harmful substances inside the peroxisome. 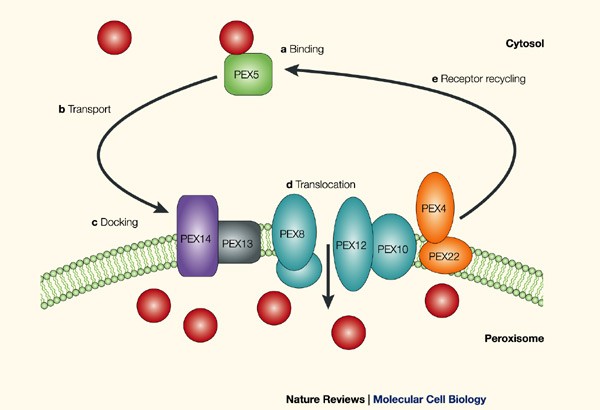 The primary function of the peroxisome is to break down the oxidation of long-chain fatty acids like mitochondria. Oxidation of fatty acid also occurs in the peroxisome, but there is some basic difference between the two. In peroxisome, our body produces acetyl co A but only in a single formation. The production process of acetyl co A does not yield ATP, just like what happens in mitochondrial beta-oxidation. But this acetyl co A is an important recycled product because acetyl co A is at the centre of many catabolic and anabolic pathways. Acetyl co A is so important from ketone body production to fatty acid production, cholesterol biosynthesis, to phospholipid biosynthesis in many of these processes. That is generated inside the peroxisome, which could be used by this cell to produce several other metabolic products. In that respect, peroxisomes function is pretty important.

Peroxisomes are present in all eukaryotic cells. We can find it in yeast, protozoa, and more cell types of higher plants.

Plants cells have peroxisome as well. Peroxisome converts reactive O2 species into other fragments that are non-toxic to the cell. They perform several particular functions in plants. Peroxisomes in leaf cells, for example, play a critical role in photorespiration. Peroxisomes are very important in seed growth and germination.

Lysosomes are coming from the Golgi apparatus. When the signal comes to the rough endoplasmic reticulum, they form some proteins which travel towards the mitochondria. They become vesicles that contain some enzymes or proteins. Lysosomes may be of two types, the primary lysosomes or the secondary lysosomes. If a vesicle is coming from the Golgi apparatus, it has not been combined with any vesicle. But peroxisomes are coming from the endoplasmic reticulum. Their functions are also a bit different. The enzymes that are present in the peroxisomes are oxidizing. Oxidize different substances rather than hydrolases.

What is the function of the peroxisome?

The peroxisome is an important site where the catabolism of long-chain fatty acids reduces reactive oxygen species.

Why is the peroxisome important?

The peroxisome is so important for our human body. Because it converts H2O2 into water and oxygen and protects the cell, also, it detoxifies alcohol in liver cells.

What are the three functions of peroxisomes?

What is the difference between a lysosome and a peroxisome?

How did peroxisomes get named?

Previous Post What do you mean by the French word Lire and how should you use it?

Next Post Inherent Powers of President: All you need to know